Our most recent recording, Henry Aldrich: Sacred Choral Music, was released in November 2019. 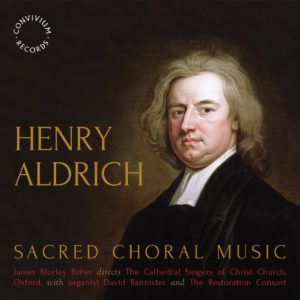 For more information or to purchase the recording, please follow this link.

Priest, architect and composer Henry Aldrich was a key figure in the musical life of seventeenth- century Oxford. A recording of his choral music, with its wide range of influences from Byrd to Purcell, is presented here by one of the choirs of the college of which he was Dean: Christ Church, Oxford.

This striking survey of music by Henry Aldrich reveals him to be a significant figure in 17th-century English musical life, with a characterful compositional voice. The Cathedral Singers of Christ Church bring this neglected music back to life in great style, with energy and commitment. — Dr Stephen Darlington MBE

It is appropriate that this recording should be made by the voluntary mixed-voice choir of Aldrich’s college. They offer forthright and committed performances — Organists’ Review

For more information or to purchase the recording, please follow this link.

The tradition of hymn singing is one of the central parts of Christian heritage and liturgy. The singing of hymns has had, and continues to have, a significant importance in the Church today whether that be in the form of plainsong, chorales or the contribution of the Protestant traditions of Western Europe. This recording seeks to capture some of the finest of these hymns as well as to introduce some contemporary tunes and illustrate how composers have adapted them as settings for choirs.