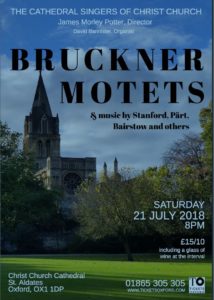 BRUCKNER: MOTETS & music by Stanford, Part, Bairstow and others

Anton Bruckner‘s motets stand as monuments of sacred choral music: expressive, peaceful, yearning, explosive. Alongside them sits music by British contemporaries, as well as 20th- and 21st-century choral music. Come and join the Cathedral Singers for this concert, which forms part of the celebrations of their 40th anniversary.

Tickets are available from Tickets Oxford and include a glass of wine in the interval. Come and join us for an evening of glorious choral music in the beautiful surroundings of Oxford’s Cathedral.